CCTV News reported on February 27th that Teslaâ€™s auto-driving function, which lasted for more than a year in Hebei Province, sued Teslaâ€™s auto-driving function and resulted in his sonâ€™s death from driving, Tesla had finally been forced to admit in front of a large amount of evidence. The vehicle was in automatic driving at the time of the incident. This is also the first case of death caused by autopilot in China. 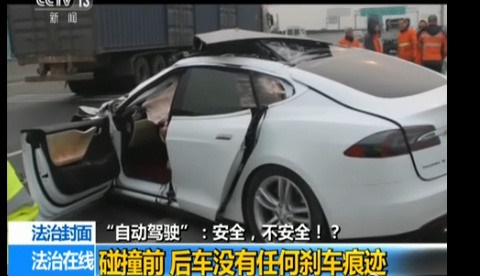 Tesla expressed that â€œWe still feel grief over the accident and we give the deepest condolences to Mr. Gao. We must point out that the current report on accident identification is incomplete and misleading. Pull has been and will continue to fully cooperate with the trial process until the accreditation body gives final conclusions."

On January 20, 2016, a rear-end collision occurred in the Beijing-Hong Kong-Macao high-speed Hebei section. A Tesla sedan crashed into a road sweeper ahead. The Tesla sedan was damaged on the spot and the 23-year-old male driver died on the sedan. .

According to the video analysis in the traffic recorder after the accident, Tesla was in a â€œfixed speedâ€ state when the accident occurred, and it failed to recognize dodge and hit the vehicle in front. An on-site traffic police investigation also revealed that Tesla had no signs of braking or deceleration during the accident and did not take any evasive measures.

The deceased father, Gao Jubin, subsequently sued Tuosilao Auto Sales Co., Ltd. (Tesla China) and the dealers involved in the sale of the vehicles involved, alleging that they misled the buyers. The ownerâ€™s family believes that Teslaâ€™s autopilot failure caused the accident and claimed 10,000 yuan from Tesla.

The case was opened in September 2016. Tesla issued a statement after the trial and said: "There is no evidence that Autopilot is in operation at the time of the accident. Autopilot is not the cause of the accident because the technology is only a driving assistance system to assist a driver who is focused on driving. Even if the oncoming obstacles appeared for nearly 20 seconds, the motorist did not take any action to avoid it, and did not take other actions to maintain control over the car. In the case of proper use, the data unequivocally stated that Autopilot Brings statistically significant safety improvements".

As Teslaâ€™s assisted driving function came on line, there have been many controversial cases. Many drivers have died and Tesla has also been accused of many times. It's not safe to drive safely, and you may get some information in this domestic car accident case. People will be more careful when using assisted driving.

DTMADE product is designed to keep up with the derivation of the market, innovation and quality stablization always become the first goal we pursue.

DTMADE provides excellent service to each OEM customer, and every project is assigned to a dedicated project manager. It takes only 6-12 months from project inception to production launch.

Cooperating with us shift your business!